For the 69th Cannes Film Festival, the AMP VISUAL TV crew once again flocked to the Croisette from 11 to 22 May 2016 armed with some heavyweight filming equipment. The goal? To capture the highlights of the world's most iconic film festival.

The opening and closing ceremonies were broadcast live on French TV channel Canal+, shot by 14 and 16 cameras respectively - including RF cameras and cameras on cranes. The famous OB Van, Milllenium 8 HD has been selected for its capacity to produce the best performance and liberty for artistic creation.

A second OB truck, the Optimum 1, was parked near the Palais des Festivals, and was used to stream live international feed as stars graced the steps and attended photo calls, as well as for press conferences, interviews and official events for the Festival de Cannes  TV channel produced in partnership with Canal+, Orange and the Cannes Film Festival. As each new celebrity took to the steps, the Optimum 1 deployed its 10 HD cameras, including one fixed to a Louma crane and another RF camera, to snap the stars as they arrived in their official cars and signed autographs. In addition, a remote camera was set up on a rig over the red carpet, and a camera was given over to a journalist for daily link-ups with Paris headquarter.

For the new "Le Journal du Festival" production broadcast on Canal+, 3 ENG cameras followed Michel Denisot every day as he embarked on a mission to discover the hottest films and stars, from established celebrities to budding talent, picking his way through the long Cannes days and the iconic hotels of the French Riviera. Thanks to their high-sensitivity sensors, the Sony FS7 cameras offer remarkable image quality, even in low-light conditions. Their filters ensured that the show's images took on a whole new dimension, due to the shallow depth of field that so characterises film.

For the very first time, AMP VISUAL TV was tasked with filming a special edition of "On n'est pas couché", one of the most popular French program of France Télévisions, The talk show was shot in the incredibly glamorous Villa Domergue in the hills around Cannes. The all-in-one mobile flying case equipments FLY 1 filmed the TV show using 12 different cameras, including two RF link and one crane camera.

As well as the Cannes Film Festival, AMP VISUAL TV attended the amfAR charity ball in Cap d'Antibes hosted by Sharon Stone at the Eden Rock, providing live streaming for Euronews. The international news channel seized the opportunity presented by a star-studded backdrop to introduce its new on-air branding look. AMP VISUAL TV was responsible for all stages of this project, from production to broadcasting, working out of the IXI 1 PROD OB truck equipped with a satellite station to provide live broadcasting of the charity ball from 7pm to 11:10pm. Once more, the AMP VISUAL TV crews' depth of know-how and breadth of experience shone through, allowing us to successfully cover the Cannes Film Festival's top events. 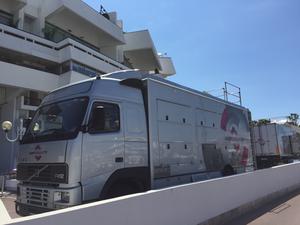 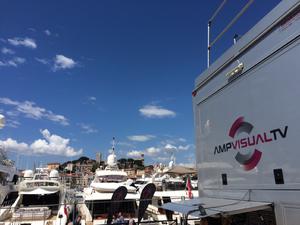 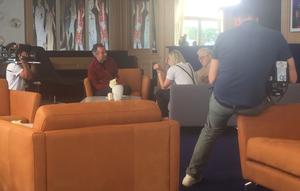 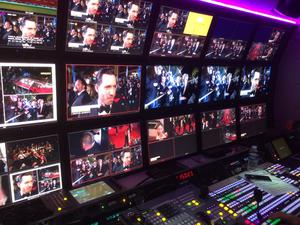